More information can be found in the FFGC BOI or at www.bartramtrail.org.

Inscription: “In 1775 William Bartram described Pensacola and the hospitality he received when even Gov. Chester urged him to be his houseguest.”

Inscription: “In 1775 William Bartram described Pensacola’s natural harbor safe and large enough to shelter all of the Navies of Europe”

Alabama Welcome Station on I-10 westbound from Pensacola

At the entrance to the Oar House Restaurant, 1000 South Pace Boulevard (sponsor Garden Clubs of District I)

Inscription: “Bartram wrote of the security and extent of intracoastal water ways from Virginia’s Chesapeake Bay to the Missippi, in 1774” 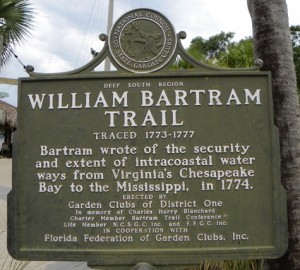