The Blue Star Memorial Marker program originated with a garden club in New Jersey in 1944 that planted approximately 8, 000 dogwood tress along a 5-1/2 mile stretch of highway as a living memorial to the men and women of the Armed Forces. The Blue Star, taken from the blue star in the service flag, was chosen to symbolize the memorial because it was used during World War II on flags and homes of families that had a son or daughter in the service. At the close of World War II, the National Council, like other public-spirited groups, was seeking a suitable means of honoring servicemen and women. It was agreed, that as Garden Clubs, it would be better to help beautify and preserve the country the men had fought for than to build stone monuments. The program has since expanded to include all men and women who had served, were serving or would serve in the armed forces of the United States. Three different types of Blue Star Memorial Markers have been adopted. They are: The Blue Star Memorial Highway Marker placed along dedicated highways; the Blue Star Memorial marker placed on other than dedicated Highways, such as National cemeteries or Veterans Medical Centers; and the Blue Star memorial By-Way Marker, which is a plaque intended for garden settings, such as parks and civic and historical grounds.
A State Landscaping Award (#43) of $25 is awarded annually for the most outstanding Blue Star Marker landscaping project. 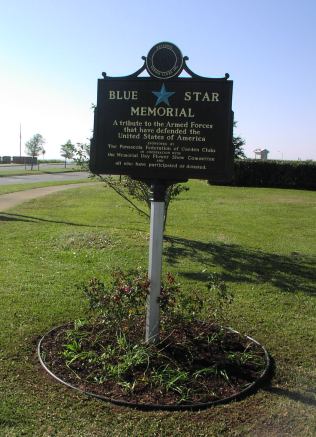 The following locations are known to have markers placed by PFGC Garden Clubs to honor our veterans:

Blue Star Memorial Highway Marker at the Florida Welcome Center off east bound Interstate 10. (This marker was relocated from its original location US 90 at FL/AL State Line originally placed in 1958.)

Blue Star Memorial Highway Marker on Scenic Hwy in 1974. Relocated in 1984 to the median at intersection of Garden Street and “A” Street.